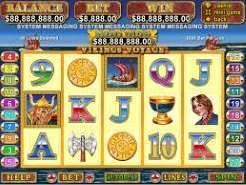 Play Now
Vikings, who pillaged European villages and lived in snowy Scandinavia, have a special place in history. That said, it's little surprise that dozens of slots games center on these Nordic seafarers, including Realtime's Viking's Voyage . Does this slot live up the legend of Vikings? Find out as we look at this 5-reel, 20-payline game's graphics, setting, format, betting options, and special features.

Viking's Voyage is one of Realtime Gaming's (RTG) older slots, so it doesn't have a sophisticated background laid out in 3D graphics. Instead, you'll see the ocean in the background coupled with two longships. This game is also devoid of music, beyond generic sound effects during payouts. If you've played other old RTG slots like Achilles, Aztec's Treasures, and Caesar's Empire, then you'll be familiar with the look and feel of Viking's Voyage. As for symbols, these include a viking (wild), longship (scatter), maiden, battle ax, gold coin, chalice, A, K, Q, J, 10, and 9. Appearing only on reels 1 and 5, the viking substitutes for every symbol except the longship scatter to form winning payouts. The maiden is the highest-paying symbol, offering 5,000 coins when appearing 5 times in an active line. The graphics are solid on the symbols, with the viking, battle ax, and gold coin featuring good detail. Still, these graphics aren't going to compare to what you'll see in newer online slots.

This is a 5-reel, 20-line slot that allows you to play anywhere from 1 to 20 lines per spin. You can also change your coin size from $0.01 to $5.00, making betting options range from one cent to $100.00. Viking's Voyage also offers a handy autospin option that lets the game do the spinning for you.

This game offers a progressive jackpot that you can win randomly on any spin. This jackpot never grows larger than four figures, but it hits frequently since any player can win regardless of their bet size. If you land 3 or more longships anywhere on the reels, you trigger 10 free spins with a 2x multiplier on wins. When you get 2 or more longships during free games, you receive between 1 and 10 free re-spins. While you can only earn scatter payouts during these re-spins, this feature still gives you additional chances to win.

Viking's Voyage may not be the most-advanced slot by today's standards, but it does have a few redeemable qualities. These include solid symbol graphics, free spins, and the bonus re-spin feature. Drawbacks to this game include limited background graphics, and only a handful of symbols that reflect Vikings. Nevertheless, Viking's Voyage is worth a few spins for anybody who appreciates these raiders' place in history.
Play Now