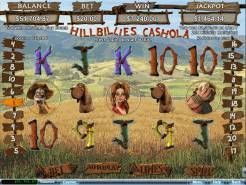 Play Now
There’s a similar slot out there by a similar name, which is why Hillbillies Cashola was even made - the success of the former led to the latter. Real Time Gaming, after all, knows what it’s doing when it comes to making slot machines for the online space. In this one, the Progressive nature of the available jackpot is one of the more dazzling features; although it is rivaled by the sheer pleasure involved with interacting with the online characters. The Hillbilly Clan is back, and all of their shenanigans are on full display for your enjoyment. Keep in mind that the Progressive Jackpot is randomly awarded, so it can literally fall into your lap at any point in the game at the end of a round of play. With 50,000 coins at stake in the paid version of play, how can you not get excited at every spinning of the reels? It could be your big shot to join the wealthy but simple lives of the hillbillies that tapped into the Black Gold (oil) of the earlier part of the 20th century, which changed their lives forever. Sure, all the speculation altered the appearance of the countryside, but what it gave back in return was well worth the effort. As for the higher-paying symbols, you want the Basset Hound Dog to show up 5 times on the reels in order to receive a load of coins. There’s a smaller 250 coin jackpot, too for this, and it can jump all the way up to 5000 coins if three Wild symbols - the Hillbilly Substitute symbol - appears on the reels as well. Of course, there are other amounts to be had, such as the 3000 coin bonanza that is courtesy of the the Home Farm symbol alignment. Three of these on the reels and you’re a winner! Download and play RTG’s Hillbillies Cashola Slot for a chance to get the gold.
Play Now