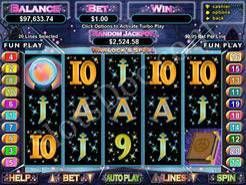 Play Now
Warlock's Spell is a 5-reel, 20-line slot that revolves around magical warlocks. These mystical figures came to prominence in the middle ages, a time when many believed that warlocks had magical powers. Warlock's Spell features both the same concept and time period. Does Warlock's Spell offer any magic of its own? Find out as we cover this game's atmosphere, graphics, betting options, and special features.

This slot takes place at night in an old castle. You'll see purple specs above the reels along with little stars on the reels to represent the warlock's magical abilities. The stars on the reels look cheesy, but we like the scene at the top and think this game has a decent overall atmosphere. Symbols include: the warlock, witch, black cat, pendant, green potion, orange sphere, A, K, Q, J, 10, and 9. The witch and warlock are both wild and combine to create mixed payouts. Both symbols also pay the most, offering 10,000 coins when they form a 5-symbol payout (either together or separately). The black cat pays well too, delivering 5,000 coins for 5 symbols. The symbol graphics are above average, with the best detail being seen in the warlock, witch, and black cat. While this slot won't compare visually to top-quality 3D games, it does stand out as far as older Realtime Gaming (RTG) slots go.

As with many RTG games, you can adjust both lines and coin size. Lines can be changed from 1-20, while coin size can be adjusted from $0.01 to $5.00. This makes the maximum bet worth $100.00 per spin, and the smallest wager worth one cent. Also note that Warlock's Spell offers an autoplay feature that lets you keep the reels spinning automatically for a specified number of turns.

The spell book is a scatter symbol that offers payouts when it lands 3 or more times anywhere on the reels. These scatter prizes include: 100x your triggering bet for 5 symbols, 20x for 4 symbols, and 2x for 3 symbols. Three or more spell books also activates a cool bonus feature, where the warlock and witch have a magic duel. This involves helping the witch select ingredients to counteract the warlock's destructive potion. Every time you make the right pick, the potion turns green; when you make the wrong pick, it turns red. The goal is to select as many correct ingredients as possible so that you get more free spins. The max number of spins that you can earn from the bonus is 100 while the minimum is 8. All prizes during free games are tripled. One more feature includes a random progressive jackpot, which can be triggered with any bet. At the time of this review, the jackpot is worth $1,705. This isn't very large, and you can win bigger prizes through the symbols.

Long before they were making high-quality slots like Bubble Bubble, Nova 7s, and Witch's Brew, Realtime made a lot of average games. Warlock's Spell looks like one of these older 5-reel slots, but it has far more than meets the eye. For starters, you'll see neat animations when the warlock and witch help form payouts. You can also look forward to a detailed bonus round that sees the witch and wizard face off - only to be proceeded by free spins with a 3x multiplier. This being said, if you open Warlock's Spell and think that it'll be just like any older RTG game, you'll be surprised by how detailed it is.
Play Now